Stuffy Nose This Fall? It Could Be One of These Three Causes

Stuffy Nose This Fall? It Could Be One of These Three Causes 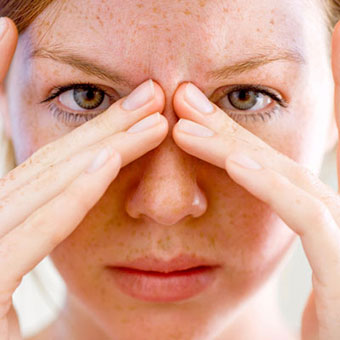 A stuffy nose is a nuisance, no matter what season you’re in. As we approach fall, it may be easy to assume your sniffling is because of the changing temperatures and colors. However, a stuffy nose (and its symptoms) may be more than just a seasonal allergy: it can be caused by a wide range of irritants.

Understanding the difference between allergic rhinitis, sinusitis and rhinosinusitis can mean finding relief faster when the symptoms start cropping up.

Any inflammation of the nasal mucous membrane is classified as rhinitis. The symptoms of rhinitis include runny/itchy nose, sneezing, irritation and congestion.

During an allergy attack, antibodies attach to mast cells to produce histamine, a chemical that opens the blood vessels, causing skin redness and swollen membranes. Sneezing and congestion are often the result of this process.

Non-allergic rhinitis can be triggered by pollutants, such as cigarette smoke, strong odors, alcoholic beverages and the cold. Other triggers include nasal blockages, infections, a deviated septum, and over-use of nasal decongestants or other medications.

Sinusitis often occurs before rhinitis and almost always occurs with concurrent rhinitis. Loss of smell and nasal obstruction/discharge occur in both disorders. Studies have shown that the mucus linings of the nose and the sinuses are simultaneously involved in a cold, and should be linked together.

Therefore, experts acknowledge the connected relationship between the nose and sinuses and refer to sinusitis as rhinosinusitis.

Rhinosinusitis occurs when the cavities around the nasal passages become inflamed. Symptoms include nasal obstruction or congestion; pain, tenderness or swelling around eyes, cheeks, nose and forehead; reduced sense of smell and taste; thick, discolored discharge from the nose or drainage down the back of the throat.

Rhinosinusitis and sinusitis are often interchangeable terms and affect the same areas of the nasal and sinus passages. As we previously discussed, the nose and the sinus passages are interconnected, and therefore, it is very common for both to be congested or inflamed during a cold or allergy attack.

If you’re experiencing chronic sinusitis or rhinosinusitis that persists for more than four weeks, contact an ear, nose or throat specialist for evaluation and treatment.

If you’re experiencing severe sinus or nasal symptoms this fall season, make an appointment with an ENT at Medical West today, who can diagnose your symptoms and provide comprehensive, expert guidance on the necessary steps to have you feeling your best. Give us a call at 205-481-7000 today to get started.